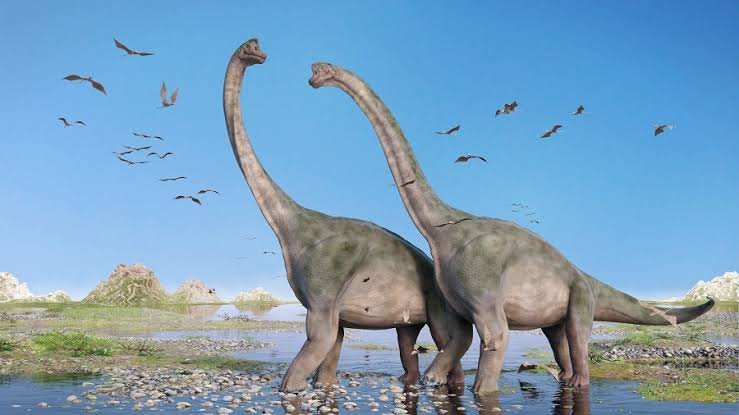 Researchers have identified fossil bone fragments of long-necked dinosaurs called sauropods, dating back to about 100-million-years from an area around West Khasi Hills District in Meghalaya.

The yet-to-be-published findings were made during a recent field trip by researchers from the Geological Survey of India’s Palaeontology division in North-East.

The GSI researchers noted that this is the first record of sauropods of probable Titanosaurian origin discovered in the region.

Sauropods had very long necks, long tails, small heads relative to the rest of their body, and four thick, pillar-like legs. They are notable for the enormous sizes attained by some species, and the group includes the largest animals to have ever lived on land.

The finding makes Meghalaya the fifth state in India after Gujarat, Madhya Pradesh, Maharashtra, and Tamil Nadu and the only state in the North-East to report Sauropod bones having titanosaurian affinity, they said.

“Dinosaur bones from Meghalaya were reported by GSI in 2001 but they were too fragmentary and ill-preserved to understand its taxonomic identification,” said Arindam Roy, Senior Geologist, Palaeontology Division, GSI. “The present find of bones is during fieldwork in 2019-2020 and 2020-21. The last visit of the team was in February 2021. The fossils are presumably of Late Cretaceous, about 100 million years ago.”

He noted that the best-preserved fossils are limb bones, adding the type of curvature, development of lateral and proximal margins of the partially preserved bone are indicative of it being a humerus bone.

He, however, noted that the conclusions are drawn from preliminary studies and detailed work is going on.

The bone fragments were collected from poorly sorted, purplish to greenish very coarse-grained arkosic sandstone interlaid with pebbly beds. More than twenty-five disarticulated, mostly fragmentary bone specimens were recovered, which are of different sizes and occur as isolated specimens but some of them were found in close proximity to each other, the researchers said.

Taxonomic identification up to genus level is difficult due to poorly preserved, incomplete, fragmentary nature of the bones and most of the recovered bones are partially petrified and partially replaced, they said.

Therefore, only three of the best-preserved ones could be studied. The largest one is a partially preserved limb bone of 55 centimetres (cm) long. It is comparable with the average humerus length of titanosaurids.

Robustness of the bone, the difference in curvature in the lateral margins and the proximal border being relatively straight, are some of the morphological characters that hint at the titanosaurid affinity, according to the researchers.

Another incomplete limb bone measuring 45cm in length is also comparable with the limb bones of titanosauriform clade, they said.

“The abundance of bones recovered during the present work and especially the finding of few limb bones and vertebrae having taxonomic characters of titanosauriform clade are unique,” Roy said. “The record of the sauropod assemblage of probable titanosaurian affinity from Meghalaya extends the distribution and diversity of vertebrates in the Late Cretaceous of India.”

An incomplete chevron of caudal vertebrae and also cervical vertebra have also been reconstructed from a few recovered bone specimens.

The other fragmentary specimens though partially preserved might probably be parts of limb bones of a sauropod dinosaurs.

Titanosaurian sauropod dinosaurs were the most diverse and abundant large-bodied terrestrial herbivores in the Southern Hemisphere landmasses during the Cretaceous Period but they were not endemic to the Gondwanan landmasses, the researchers said.

Gondwana is the southern half of the Pangaean supercontinent that existed some 300 million years ago and is composed of the major continental blocks of South America, Africa, Arabia, Madagascar, Sri Lanka, India, Antarctica, and Australia.

In India, the Late Cretaceous sauropod dinosaurs generally belong to the titanosaurian clade and has been reported from the Lameta Formation of Gujarat, Madhya Pradesh and Maharashtra and Kallamedu Formation of Tamil Nadu, the researchers said.